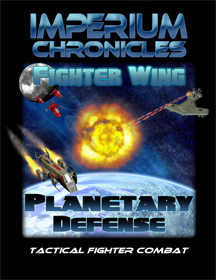 Planetary Defense is the first expansion for the Fleets at War: Fighter Wing tactical fighter combat game.  Fighter Wing (and this expansion) focuses on fighters and other small craft as they engage in dogfights among the stars.

Note: You will need to have the Fighter Wing rulebook to use this expansion.