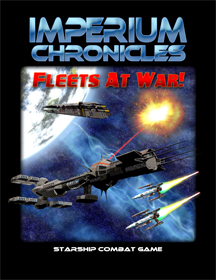 Fleets at War! is a tactical starship combat game played on the floor or a large table with cardboard counters representing capital ships, fighters, and other space craft. Simplified game mechanics let players engage in small skirmishes all the way up to large-scale battles involving dozens of ships.

Fleets at War! uses the IMP System that reduces the number of die rolls necessary during play.  All other calculations are done by referencing a chart of two opposing attributes (ex. Damage vs. Armor) to find a result.  The goal of this system is to speed up play and allow for large-scale battles.

Each counter in the game represents a single starship or a flight of four to five fighters.  An inch equals approximately 0.2 miles, or a mile equals 5 inches.  Each game turn equals roughly 2 to 3 minutes.

Each class of ship (i.e.: heavy cruiser, destroyer, frigate, etc.) has a one- or two-sided card listing all the stats for that class, including its offensive and defensive capabilities.