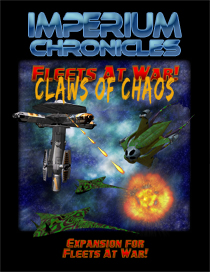 Claws of Chaos is the first expansion for the Fleets at War! tactical starship combat game.  It is played on the floor or a large table with cardboard counters representing capital ships, fighters, and other space craft.  Simplified game mechanics let players engage in small skirmishes all the way up to large-scale battles involving dozens of ships.

Note: You will need to have the Fleets at War! rulebook to use this expansion.