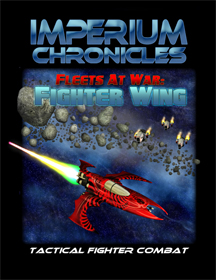 Fleets at War: Fighter Wing is a spin-off of the tactical combat game Fleets at War! While F@W! featured battles between giant capital ships, Fighter Wing focuses on fighters and other small craft as they engage in dogfights among the stars.

Note: You do NOT need to own Fleets at War! to play Fighter Wing.

Fleets at War: Fighter Wing uses the IMP System to reduce the number of die rolls necessary during play.  All other calculations are done by referencing a chart of two opposing attributes (ex. Damage vs. Armor) to find a result.  The goal of this system is to speed up play and allow for large-scale battles.