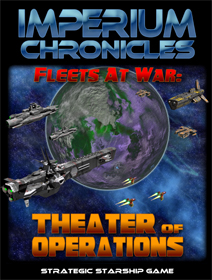 Fleets at War: Theater of Operations (F@W:ToO) is a strategic wargame set in the Imperium Chronicles universe. The game represents the large scale organization and resource management of the Imperium and the Magna Supremacy during armed conflict, most recently the Third Imperium-Magna War.

Theater of Operations is designed with ease of play in mind, including rules that are simple to learn and execute.

One player takes the role of the Imperium while the other player controls the Magna Supremacy. Each side starts the game with a fleet of ships that can be placed anywhere on their side of the demilitarized zone (DMZ). As the game progresses, each side gets points based on the number of zones on the map they possess. These points are then used to build new ships. The winner is the side that defeats the other player, usually by destroying all of his ships and/or capturing his zones.

If you like Fleets at War: Theater of Operations, try the expansion The Talion Front, which you can buy individually or as a bundle.