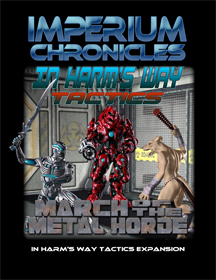 March of the Metal Horde is the first expansion for the In Harm’s Way Tactics wargame. During each game, players take the role of unique character classes, each with their own set of special abilities and weapons. The game includes at least three ways to play, including quick skirmishes, missions, or a campaign. Solo play is also supported.

March of the Metal Horde (MotMH) expands the original game with additional character classes, abilities, weapons, and enemies to fight.

Note: You will need the In Harm’s Way Tactics rulebook to use this expansion.