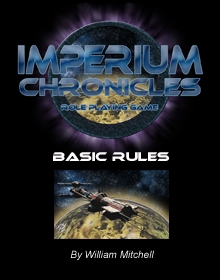 The Imperium Chronicles is a mashup of sci-fi and fantasy, set in a universe of intrigue and adventure. The Imperium is a tapestry of conflicting groups, each with their own agenda. From the richest aristocrat to the poorest thug, every citizen dreams of power, prestige, and a piece of the action.