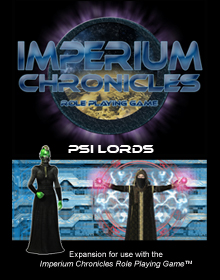 In the darkness, someone sees;
In the silence, someone hears;
In your dreams, someone speaks.

Psi Lords is the first expansion for the Imperium Chronicles Role Playing Game. It features new psionics, weapons, gear, and a mysterious faction called the Psi Lords! A dark brotherhood, their organization collects and sells information to bolster their influence among the most powerful groups of the Imperium.