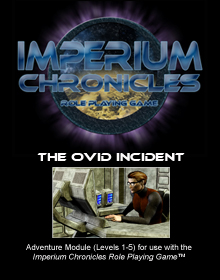 That was the last transmission from the Ovid Research Facility located on a remote moon far from anywhere. The work they were doing there was vital for the Imperium, but nobody has heard from them in days. The first rescue team arrived and promptly stopped communicating. Now it’s your team’s chance to be heroes. The only problem is there’s a secret nobody seems willing to share. When the truth comes out, it might get you killed.

The Ovid Incident is an adventure supplement for the Imperium Chronicles RPG (levels 1-5), suitable for two to five players.